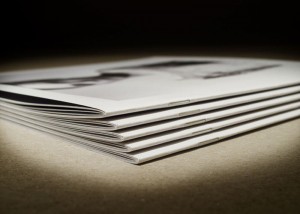 What is Saddle Stitching?

Saddle Stitching may sound like an odd name for a book binding process that places wire staples through sheets of paper but it is more commonly known as “Stitching” in the print and finishing industry. It originally received its name as during the stitching process, folded sheets were draped over an apparatus that looked very much like a saddle, thus came the name Saddle Stitching.

Saddle Stitching is a very popular book binding method in which folded sheets are gathered, one inside the other, and then are stapled through the fold line with wire staples. There are no “stitches” in this type of binding, but rather a wire staple that passes through the folded crease from the outside and is clinched between the two centermost pages of the book. The size of the book will dictate the number of staples used along the spine.

When to use Saddle Stitching…

Saddle Stitching is an ideal binding method for anyone wishing to produce items such as booklets, workbooks, magazines, event programs, coloring books, catalogs and other publications where an inexpensive, yet professional look is desired.

Saddle Stitching is most effective for binding booklets with around 64 pages or less. Books with more pages than that may become bulky when folded and won’t lie as flat when stitched.